Stéphane Gilles is a French artist. He has lived since 1965 in Reunion Island in the Indian Ocean. He exhibits in France and he’s known for his work about imaginary worlds both seen and unseen, including the myth of Piton Tortue*. 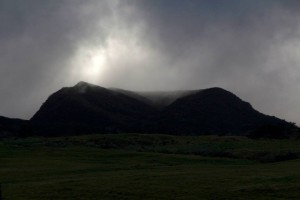 Piton Tortue, centre of the universe

*Piton Tortue is an extinct volcano’s crater on central Reunion Island. The myth describes how the world was born and from that point, how humanity toddled her first steps to the universe.